Our local history is very important to Friends of Ancells Farm.  We have installed a history information board in the park, near the Farm Drive entrance.

More information about our local history is shown below:

The Ancells Farm estate was built in the late 1980s, but the area’s history goes back much further.

The Ancells and other land was bequeathed to the Bishop of Winchester in 975 by King Edgar who stipulated that the income from the land should be used to support the monks of St Swithan to pray for the souls of the King and his sons for ever.  The church used the land for hunting, hawking, fishing and fowling to provide food as well as sport.  The land was held by them until the late 19th century.  This area is what was the original Fleet.

Nearby Fleet Pond was created by damming several streams before 1313, the earliest mention found so far, and used for fish and wild fowl farming.  Originally two ponds, one was in the Ancells area and was converted to pasture after the banks gave way in a storm in 1567.

Richard Stanley held a lease of Fleet Farm, its associated fields, and Fleet Mill from the Bishop of Winchester and he sublet to a tenant.

A lease of 1632 describes Fleet Farm as being built of timer, brick and tile, having 6 lower rooms and 9 small upper rooms, two barns, a garden and an orchard.  It had 49 acres of coarse meadow, 168 acres of heathy ground, 60 acres of arable land, 4 acres of coppice and a cottage with 19 acres.  Also belonging to the farm was a grist mill and two ponds.

When a new tenant was sought, Matthew Ansell agreed to take over in 1694, believing that any expenses to repair and maintain the premises would be offset against his rent. Richard Stanley’s widow, Mary, disputed the arrangements so, in 1699, Ansell complained to the court, listing full details of his outgoings. Documents of the case, held in The National Archives, give insights into the management of the land.  The outcome of the court case has not yet been discovered, however Matthew Ansell’s name became associated with the Area for a long time.

It is not clear exactly where the original Ancells Farm was, however it’s possible that at one time Fleet Farm was known as Ansells?

Fleet Mill was operational until the 1940s, changing hands quite a few times.  It was sold by the Ministry of Defence in the 1970s.  The mill later fell into disrepair and after an application for it to become a listed building was declined, it was demolished in 1994, despite public protests.  The grind stones have been made into a statue, which can still be seen on the corner of Ancells Road and Minley Road, by the offices. 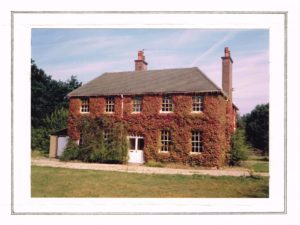 Ancells Farmhouse, built around 1913, was occupied by farmer Bertie Hunt but his tenure lasted only a few years (the farm was recorded as Ancele Farm).  A local resident recalled collecting acorns for Farmer Hunt’s pigs during the 1920s.

After farming ceased, Ancells Farmhouse was occupied by Captain Cockell in 1926, then by Brigadier General Benson, secretary of Fleet Polo Club (see below).  He was succeeded by Major Withycombe, who also served as Club Secretary.  This house stood until it was demolished in 1986. 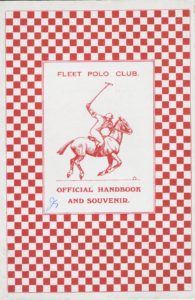 In 1920, Lord Calthorpe gave land for polo grounds and transferred Frank Cousins, one of his employees, to Ancells Farm as Groundsman.  A polo club formed at Wellington College moved here and the name changed to Fleet Polo Club in 1924.  The home team was named ‘Ancells Farm’.

There was a club house, pavilion, stables for up to 60 ponies, tack rooms, feed stores and 3 polo grounds.   There was a separate ground for the female polo players. 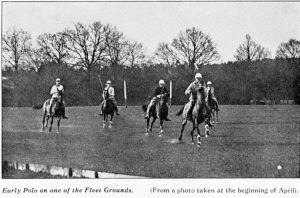 The depression and outbreak of World War 2 ended the polo club.

The Army at Ancells Farm

Nearby Aldershot became the home of the British Army in 1854.  The War Department bought many acres of old common land for training, also Fleet Pond, Fleet Farm and Fleet Mill.  Fleet Pond was needed to provide water to the thousands of horses, as well as the men.  By the 1970s this was surplus to the WD’s needs.  Fleet Pond was sold to Fleet UDC in 1973 and Fleet Pond Society was formed in 1976.

And Ancells Farm Estate was born……

A development plan was prepared in 1982, planning permission was granted and today’s Ancells Farm Estate grew.

Further information about the history of Fleet can be found on the Fleet and Crookham Local History Group’s website at http://www.fclhg.org.uk/, or emailed to them at fclhg@talktalk.net.