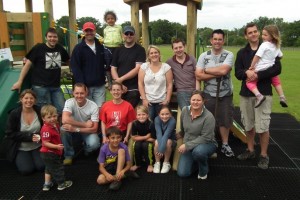 The playground on Ancells Farm has been transformed by volunteers who installed thousands of pounds of new equipment over the weekend.

And to save money – and bring the community together – a dedicated tea of volunteers spent two days digging holes, mixing cement, tightening bolts and laying safety matting. Andy Bullock from Fawns Recreational Services, the Farnborough-based company which supplied the equipment, was on hand to make sure the work was finished to the highest standards. Fawns is the same company that provided the larger over-8s equipment in the park last year.

The equipment, aimed at 4-7-year-olds, was purchased by the group thanks to a successful bid to Fleet Lions, grants from Hart District Council, local fundraising, and generous donations. It is the biggest project completed by Friends of Ancells Farm since it was set up just over a year ago.

Nicola Saunders, chair of Friends of Ancells Farm, said: “It was a fantastic – if tiring – weekend and we would like to thank everyone who worked so hard and everyone who made a contribution, whether financial, giving their time or making cake to help keep energy levels up!

We were delighted to see some new faces come along to lend a hand and took pride in hearing so many positive comments from people who were in the park and hadn’t heard of the group. It spurs you on when you get such great feedback.

Installing the equipment ourselves saved around £3,000. But we couldn’t have done it without being fully supervised by Andy from Fawns and colleague John Kenton. He has been extremely helpful to us in this project and we would like to thank him, along with Damien Stewart from C&H Hire Centres Ltd who kindly lent us the cement mixer for the weekend after a plea went out on Fleet Parents Facebook page. Fleet Lions came up trumps with the safety barriers as we did have to ensure  excited children did not climb on the equipment before it was ready.

Many of the children who will make use of this equipment were there over the weekend and we know they feel proud to have seen the hard work that has gone into making this happen.”

The group also managed to find time for some weeding around the trees and bushes that volunteers planted in the park last year thanks to the RHS ‘It’s Your Neighbourhood’ campaign, and painted a few more fence panels in the under-5s park.

“We are lucky to have support from Fleet Town Council and Hart District Council, whose advice and help along the way has been reassuring,” added Nicola.

“And a big thank you to Dave and staff at the Falkners Arms who let us use their facilities more than once.”